Estes Park, Colorado is picture perfect. The charming downtown full of cabin-like looking coffee, book, and ice cream shops ends and the same road runs into the entrance of Rocky Mountain National Park. The aptly named Rocky Mountains serve as the backdrop to every drive, walk, and adventure the people here go on.

I am staying put here for a bit and staying with my dad’s cousin (my dad has the COOLEST cousins and I can’t believe it took me this long to get to know them better, like if I had to answer the question “Who are two of the coolest people you know?” I’d say, “My dad’s cousins, Jill and Cindy.”) Today I applied for temporary work at the Estes Park Brewery and as a delivery person for the telephone directory.

So I decided to get a hike in before work possibly fills my schedule. I trudged through both soft and icy snow in order to see a panoply called Mills Lake in Rocky Mountain National Park. I saw five people on the trail and three of them turned around because every twentieth step would plunge you knee deep in snow. I had Yak Trax (chains that slide on my boots) and two walking sticks made for petite hikers which were waiting for me at the trailhead and I felt like Mills Lake had to be seen. I read that it’s the prettiest lake in the park. So I trudged on with a big smile and a lot of layers. 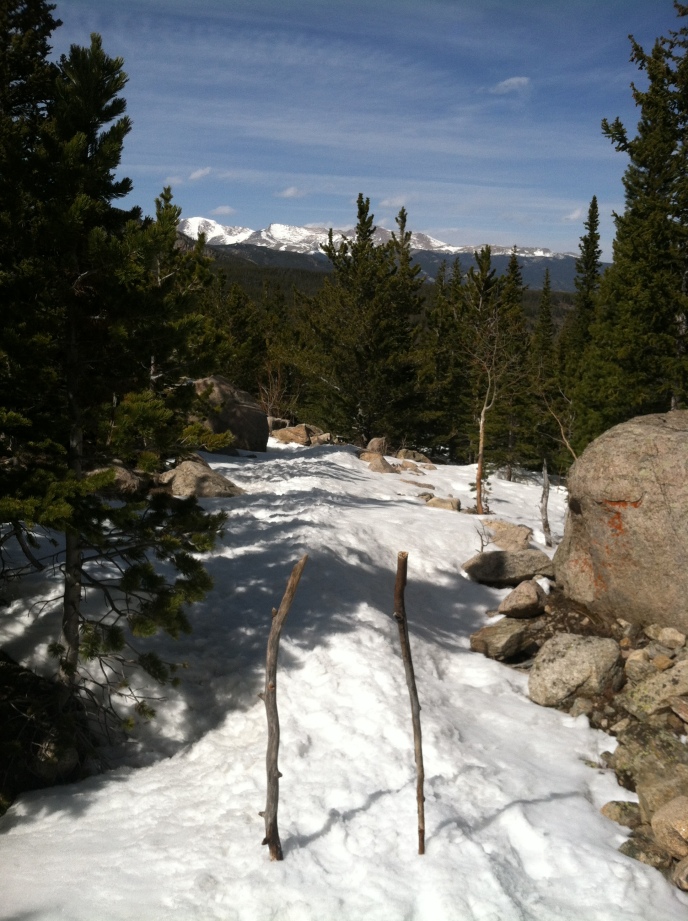 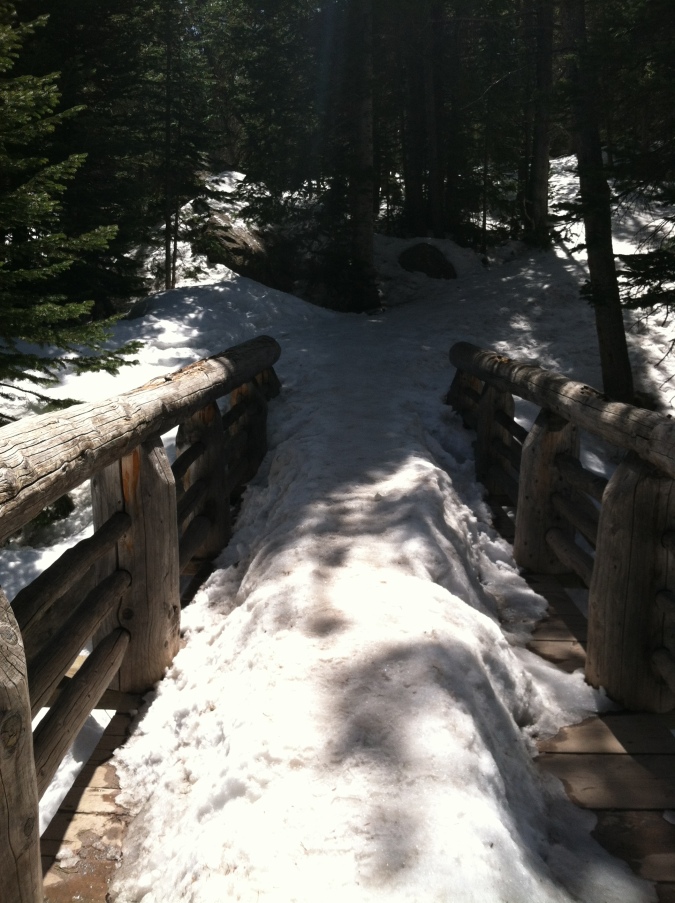 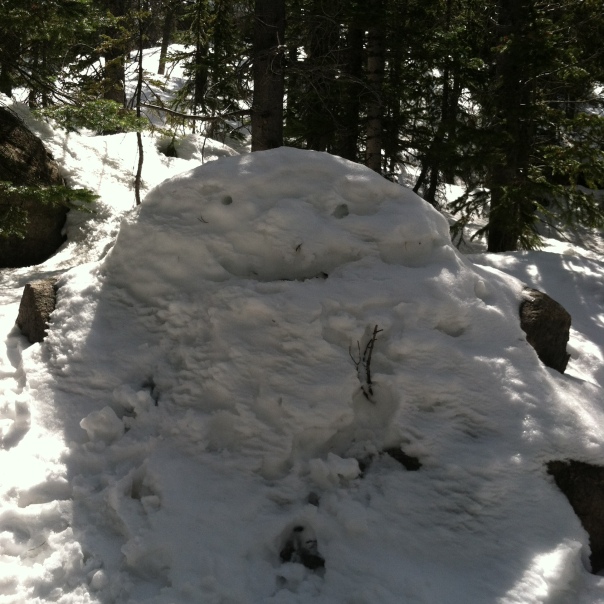 The trail was well marked in the beginning and then I think I ended up following one fella’s large tracks.. Turns out he had no idea where he was going. This made the 5.5 mile hike about 7 miles. But the scenery was magical.

When I first arrived in Colorado, Cindy had mentioned what to do if I saw wildlife. I asked, “What about if I see a mountain lion?” She smirked and said, “Oh, you won’t even see it. It’ll just have you. No need to worry about what to do. You’re gone.”

So at one point, I was in the middle of nowhere (I knew the trail followed the river, so I didn’t feel like I’d never get out), and was surrounded by cliffs, but I felt very vulnerable in a wide open space. I heard a sound, probably my own footsteps, but it startled me and I looked up. I was just imagining a mountain lion waiting to pounce. About a mile later, I saw tracks in the snow that did not belong to a human. My life flashed before my eyes. One thought was, “Well, what a cool way to go. Being attacked by a mountain lion in Colorado.” Another thought was, “I’m glad I quit my desk job and got to see some beautiful places.” Another was, “I wonder what people will think when they read my notepad on my phone full of my crazy wonderments.”

My next instinct was to call people I love. This was interesting because the people that came to mind were maybe surprising to me. I didn’t call because I knew I was being dramatic and it would worry folks, and I tried to shake the feeling off.

I followed the fella’s tracks until they ended in a big circle, looking like he stood there, turned around a few times, and then turned back. I knew I had to be close to the panoply destination, so I was totally bummed about having to turn around. I got back to the river and climbed a rock to get the prettiest view. And on top of the rock, I found the trail again!

Check out the panoply, people! 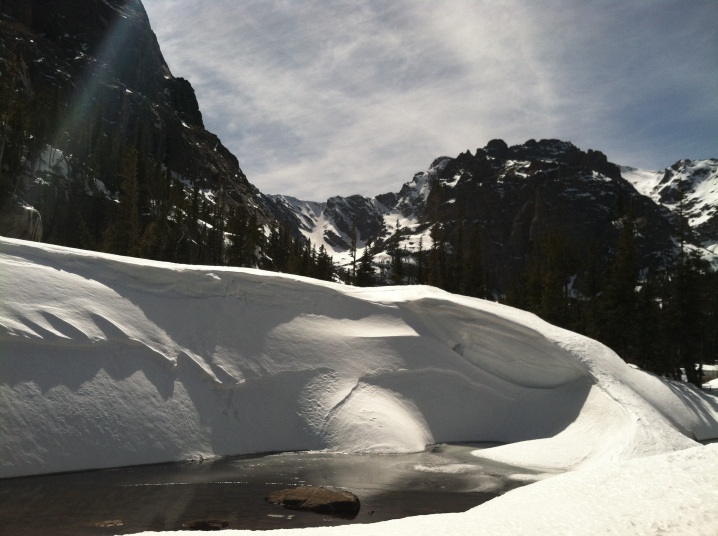 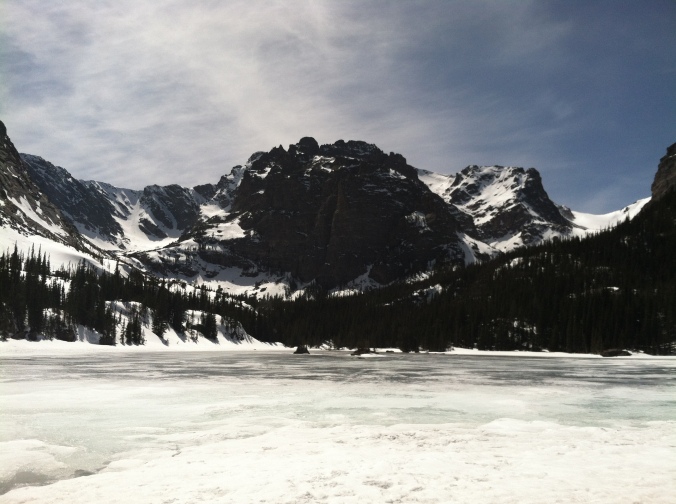 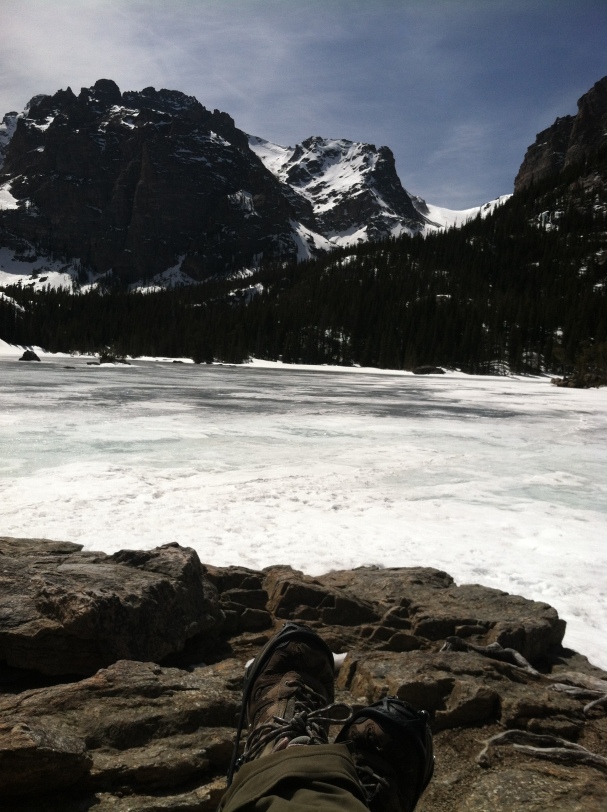 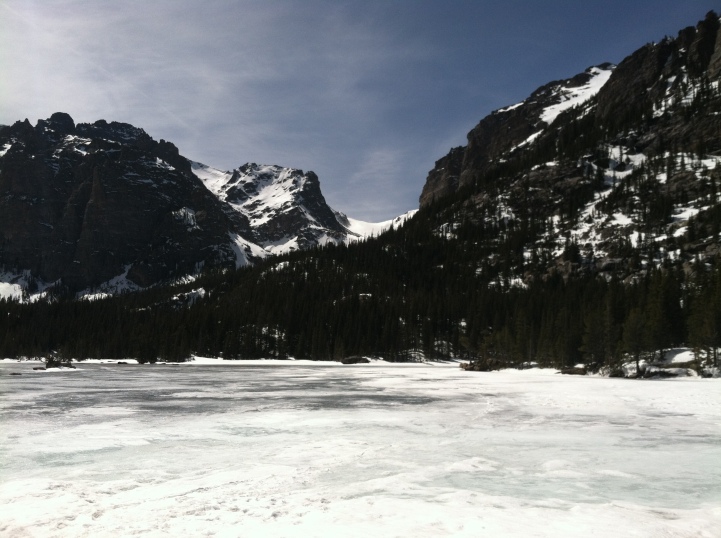 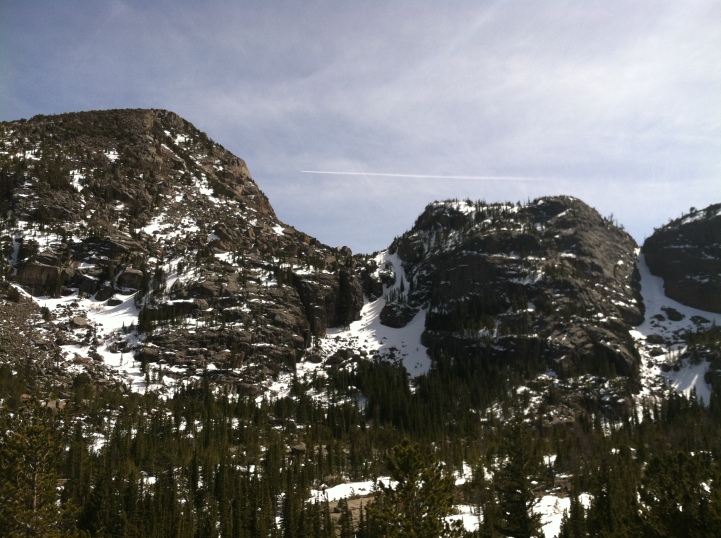 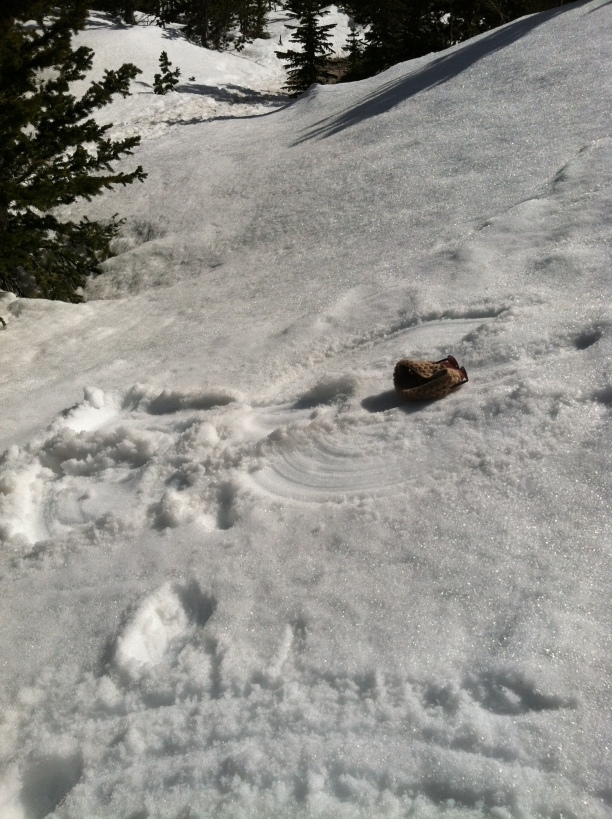 Lost my hat while making the snow angel 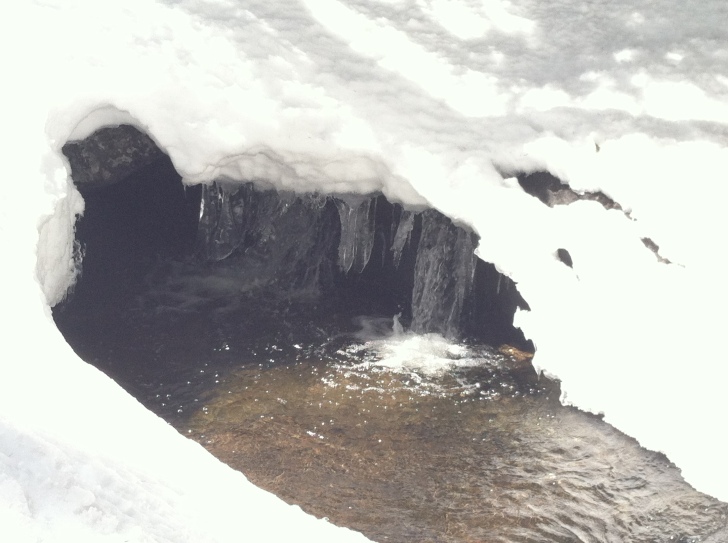 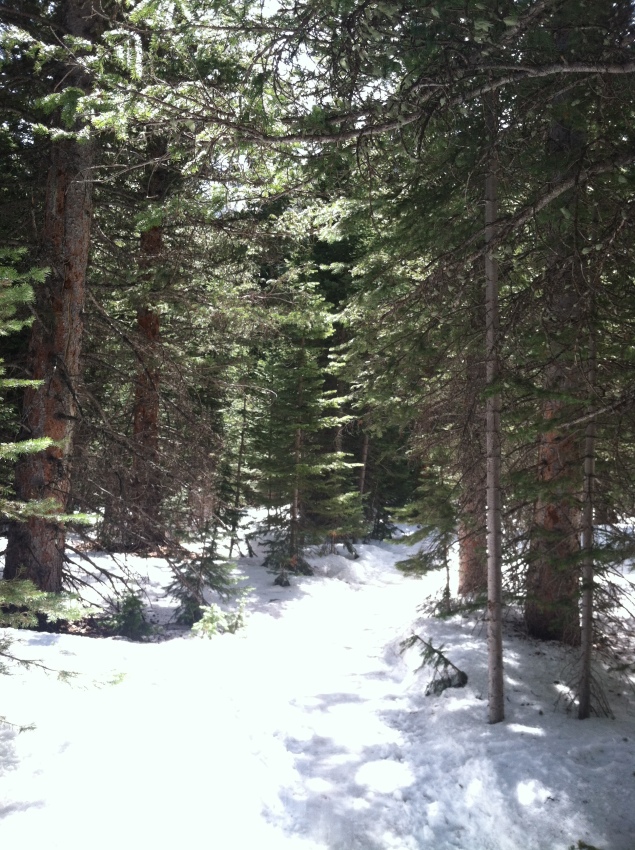 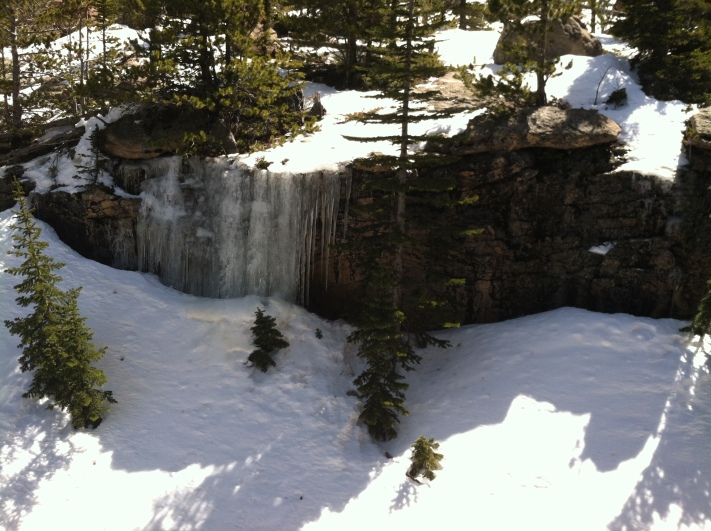 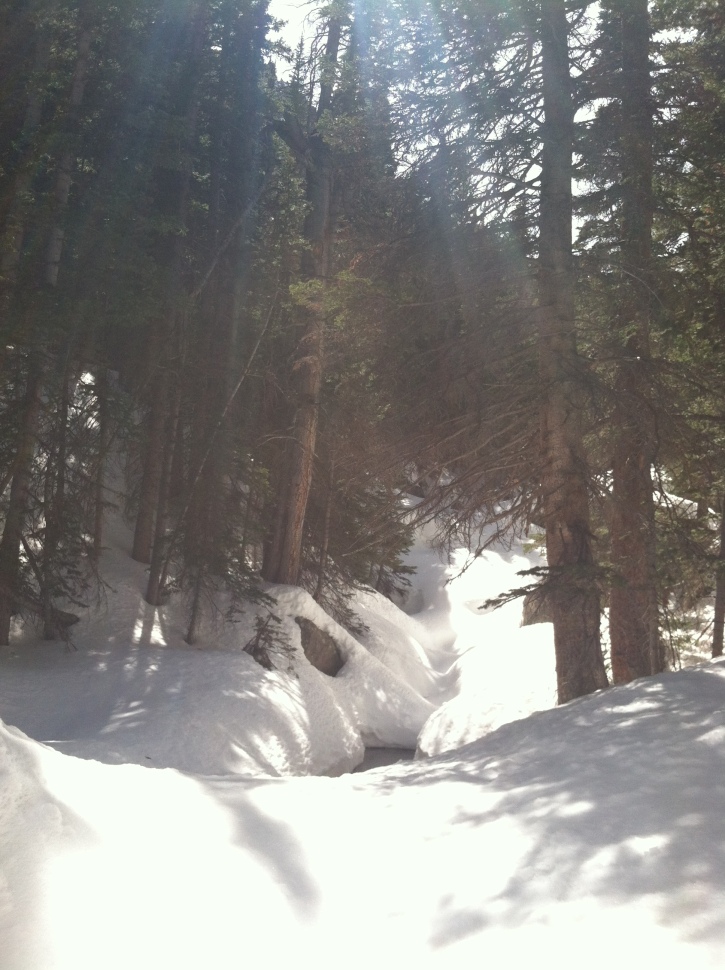 One thought on “panoply.”