1. to look about or stare with great curiosity, as by craning the neck or turning the head.

I am not a Yankee fan, but I am a Derek Jeter fan. He’s a handsome son of a gun with a good heart (I guess I don’t know that really, but who will disagree?) When he retired, the tribute commercials made me cry along with the rest of America.

My walk to Starbucks is always exciting because I’m closer to getting caffeine, and my heart beats faster as I think, “Will I see Jeter today?” Jeter and a side of Americano. Doesn’t it sound delicious??

It took six months working in Tampa next to his favorite Starbucks for our schedules to collide. He wore big aviator glasses and his smile made it hard to look away. So I did not. I ordered my coffee while I was having an internal struggle…I didn’t want to interrupt him because the poor beautiful man could most likely never have a green tea in peace, but I also didn’t want to not say anything, because I had been waiting to see the famous pin-striped #2 for a while.

The barista broke my daze when he asked, “Would you like any food today?”

I looked at the pastry case and saw a large snowman sugar cookie. I said, “Sure, I’ll take a snowman cookie please.”

I walked outside and up to his table where he sat with three other people. I nervously set the snowman cookie in front of him as I quickly said, “This is for you guys to share.”

He smiled and laughed and said, “Thanks. That’s really nice of you. I appreciate it.” I would’ve responded, but I was walking away rapidly, my footsteps matching my racing heartbeat.

Then folks gave me a hard time. “You don’t think Jeter can afford his own cookie?” or “You didn’t get a photo?!” So I decided the next time I saw him, I’d say, “I’m the girl who got you the snowman cookie. My friends don’t believe me, so can we please get a photo together?”

The problem was, when I saw him a couple days ago, it was about seven months later; the snowman cookie story has melted and gone stale. So I didn’t have a plan. I froze. I sat at a table a few tables away. Then I realized I wasn’t close enough, so I non-nonchalantly moved to the table next to him. He was smiling and talking with his friend. I snuck a photo. I pretended to read. I rubbernecked a ridiculous amount. 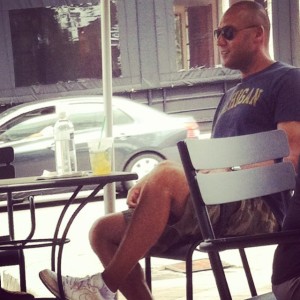 I then stood up because I was on the clock at work, like a real slacker. His friend looked over at me and smiled, so I smiled back and said, “Hi.” Then I looked at Derek Jeter and saluted with my left hand, because I was holding my coffee in my right. I said, “’Ello, Captain.” He smiled, nodded, and said, “Hey.”

One thought on “rubberneck.”