The Tongariro Alpine Crossing is listed one of the top 10 day hikes in the world. While on our 1st of 19 kilometers, Kasey said, “We should do all ten.” I said, “Yeah! We’ll see what we think on kilometer 17 or 18…”

One must get shuttled to the beginning of the trail and then get shuttled back to their car. The service we were going to use wasn’t running Saturday-Monday because of the extreme weather. Wind, rain, and cold. But we were leaving the area on Monday evening to catch our ferry on Tuesday morning, so we wanted to try to get this walk in before it was too late. I set my alarm for 6am Monday morning and called another shuttle service to see if they were braving the wind.

Steve on the other end said yes, they would, at 7, 8, and 9am, but the 9am was reserved for only extremely fit people. I woke up the girls and we decided to attempt to make the 8am shuttle. We packed, filled Nana with petrol, and had 30 minutes to drive the 45 minute route to the pickup. I drove the route in 25 minutes, powered on instant coffee and tropical muesli.

The bus driver was way too awake for my liking. He passed out brochures and we had to sign a form saying we knew the danger we were putting ourselves in and it was our own fault. He said, “You guys see the picture of the dead guy on the brochure? He died from volcanic ash from this trek. This could be you if you don’t hurry through the hazard zones. Cool? Cool.” And he gave a thumbs up paired with a cheeky grin.

19.4km. I’d say 16 of them were done in the rain. I walked half of it with numb legs which was hard to do. My feet were completely frozen. It was the kind of torrential downpour where you know snot is on your face, but you have nothing dry to get it off with. My dry change of clothes were wet within the hour. I remember on one stretch where we were going straight up, the wind was so strong, I stood still and almost fell over. I felt like standing still was good progress because I wasn’t giving up and I wasn’t getting blown away.

I tried to convince myself that certain parts of the trail weren’t that pretty so I wouldn’t have to use my numb hands to unzip my backpack and take a photo.

I kept thinking about things that would have made it more difficult:

At least I don’t have blisters

At least I don’t have a whiny baby 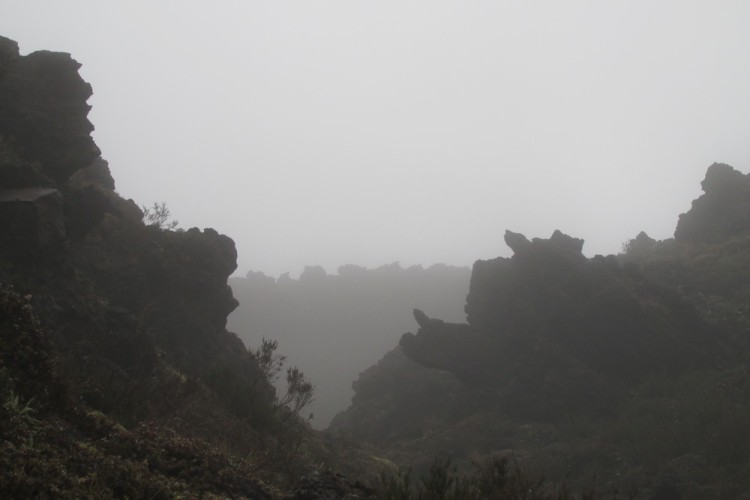 10km in, we were heading straight downhill and my knee was screaming. I heard a few people behind me start hooting and hollering and I thought maybe someone just proposed to someone or something. I looked up and the fog had lifted for the first time in about three hours. On my left were the most incredible looking lakes I had ever seen, emerald lakes formed from volcanic craters. The first lake was blue, the second a smokers’ teeth yellow, and the third a turquoise that put any other color to shame. I screamed with pure joy, “Sunshine! Stay with us, baby!!”

I had been going so slow at this point due to my knee and the sleet, that Kasey and Brittany were about 400m ahead of me. I had a moment alone, repeatedly telling God how amazing and creative He was and how thankful I was that in that very instant, the fog lifted. How wild that I was hiking next to the most unbelievable scenery without any clue what I was missing. There’s a sermon in there for sure.

We arrived at a hut about 14km in and could barely use our hands to open the peanut butter to spread on our rice cakes, but boy, we were thankful for shelter.  Other hikers were eating their sandwiches and steam was coming from their heads and shoulders and their legs were shaking to keep their bodies warm. We shared knowing glances with big eyes as if to say, “Whew, it’s tough out there, but we’re in this together.”

We completed the trek in a little under seven hours, over an hour ahead of schedule. If the sun had been shining, I’m sure it would’ve taken us the full eight hours.

Then we had a four hour drive to Wellington ahead of us, since we needed to be at the ferry terminal for the South Island by 7am. I took three Tylenol  and had two cups of Volcano Roasting Company coffee (we stayed with the coffee roasters again and babysat Zak while they served coffee at a marathon up the mountain), and was surprised at how on-top-of-the-world  I felt.

We ran across this shoeful fence on the way. I imagine people making wishes on these shoes and then leaving them here to come true. Wishes for their pair in life, someone who fits just right, whether they’ve found that person or not. 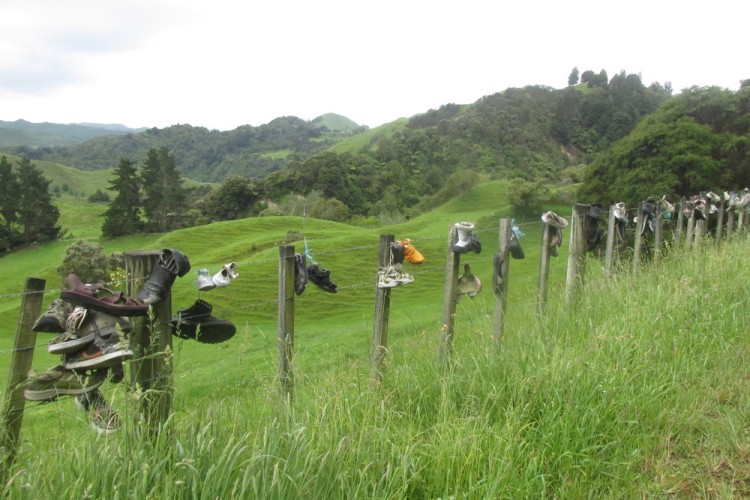