Wild Bill is as cool as he is wild. He lives on top of a hill overlooking the bay, surrounded by a porch with no railings that makes the view look even larger. Him and Linda have an outdoor bathtub that they use every day to get clean and I imagine, to be reminded how blessed they are to live here. They have a son named Kyle who is 28-years-old. He might’ve been surprised to be sharing his living space with three American girls, but we’ve had a ball so far. We played Texas Hold ’Em down at our little house after we ate pork from the pig his mom killed with a rock. Linda is an intimidating woman and she makes a killer quiche.

We have heard a lot about a brewery called the Mussel Inn (Ross wrote it under our “must do in Golden Bay” list) and last night, Bill told us about their deal on stoat and cat tails. If you kill a stoat or a cat, you get two free pints because you’re helping to protect the precious birds of New Zealand. Bill has used this deal so often, they accused him of breeding stoats just for the free beers.

Kasey and Brittany were great sports for the Christmas Eve slumber party. They pretended to be John and Greg and we laughed and chatted about the future, just like we would do at home. Kasey said, “Well, I’m getting married in February…” and we went from there.

We were a bit apprehensive about Christmas without our families. We had to skip the “I’ll Be Home for Christmas” song on Kasey’s playlist. But this morning, we woke in Golden Bay, said “Merry Christmas” to Kyle, made coffee, and started on our big biscuit and gravy breakfast. Kyle went off to Nelson for a family get-together, and we girls sat down to our breakfast and mimosas and smiles as big as the pile of gifts on the table. We shared family traditions and little stories and said a blessing thanking the Lord for all He has blessed us with. I told them about how one year during the blessing at home, I was a bit emotional, I had missed my family and was so glad to be with them, I felt a lump forming in my throat. Right at that moment, John, who was holding my hand for the blessing, dipped my hand in the eggs.

My family always makes a big biscuit and gravy breakfast, and I decided to give it a try. The sausage gravy was exceptional, which I was very thankful for, since I had planned on having internet to get the recipe and we have not had a connection. I just added a little bit of this, a little bit of that, a lot of butter, and voila, we were so pleased. Kasey cooked our eggs in the bacon grease and added goat feta cheese, so they were unbelievably tasty.

We piled on the couch and opened gifts youngest to oldest. We opened electrical cords, a cow sticker for Nana, a Celine Dion CD, new shirts, socks with non-slip rubber pads on the bottom, a kiwi coffee mug, a USA scarf, and so much more. We scratched off lottery tickets and were one Santa picture away from $10,000. That would’ve changed our year a bit. We wouldn’t have to go cat hunting tonight. 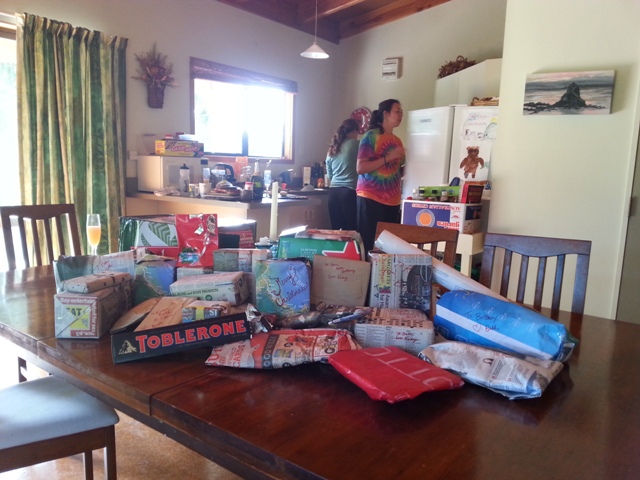 Golden Bay is very close to the tip of the South Island. The longest sandbar in the world is on the tip and it’s called Farewell Spit. We walked a few kilometers to a sand dune so we could spit off of it on the Farewell Spit (where we’d become Spit Sisters, quite like Blood Brothers). We walked to the top of the dune and saw that it kept going, like a huge desert full of ripply sand from the wind. We ran and slid and jumped and squealed after we spit. Then we walked about 600m so we could see the water on the other side. Beautiful.

Ross made a list for us of places we must see. As we arrive at the destinations, each time we gasp and say, “Damnit, Ross.” It’s said in a way like, “Wow, Ross is the best and he always comes through.” Bill, Linda, Caroline from Ireland, and their best friends Dave, and Judy came by our place in their “yute” on their way to Whaririki Beach. Dave hopped out of the truck and hugged us before he heard our names. I decided tonight that I want to become one of these people that hugs when they meet others. Well, when it’s appropriate, not at a business meeting or anything. It really warms your heart right up. Dave decided he’d drive Nana to our destination as our tour guide. As he put her in reverse, he said, “Boy, have you girls made a name for yourselves. Wowee.”

“Oh, yeah?” I questioned, very anxious to hear this explanation.

“Oh gosh, yeah. You’re big news in the south. What you did on the Ghost Road. Wow. You have glowing reviews. You’ve come up smiling,” he said, making too much eye contact with Kasey instead of the road.

Dave is old enough to have a daughter who is 43-years-old. He won a silver medal in his age range for the New Zealand Surfing Championship. He wears an Indiana Jones type hat and has a summertime glow. He is chock full of jokes and would be a fun person to play the card game “BS” against. I think even if he had two 2’s, he’d say he had three.

The hike to Whaririki Beach is about twenty minutes through farm land. 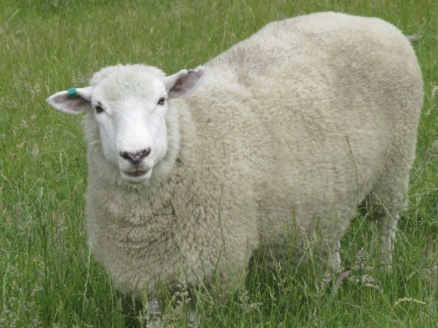 As Brittany and I were walking as the sun was setting, she said she wished she had saved words like “amazing” and “awesome” for moments like this. “Magnificent” is what came to my mind. In fact, it’s crazy how deep my thoughts and feelings get when I’m surrounded by majesty like this. Love, meaning, purpose, and “Mama keeps whites bright like the sunshine, Mama’s got the magic of Clorox Two.” 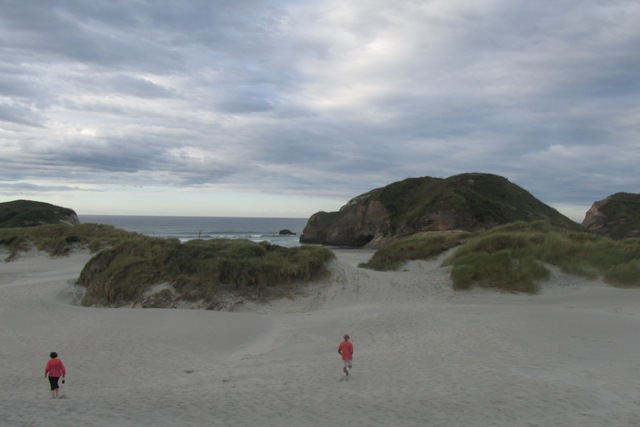 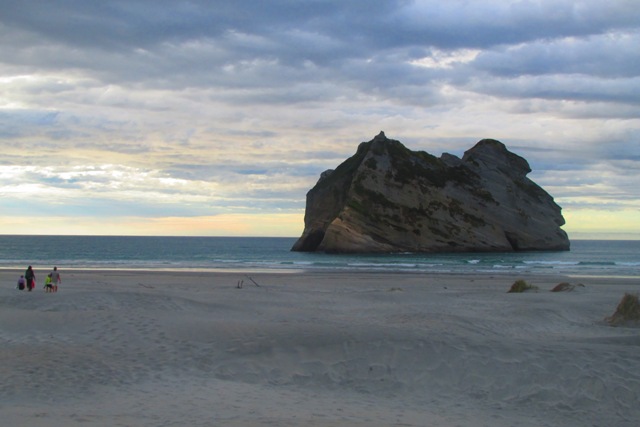 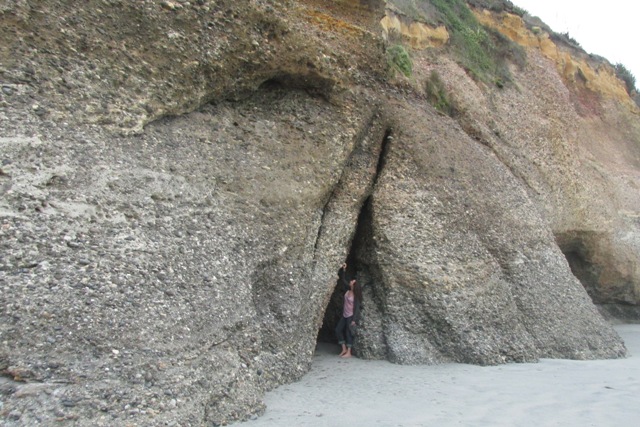 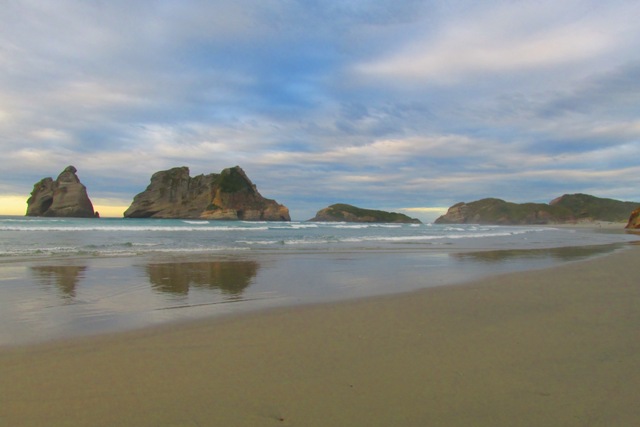 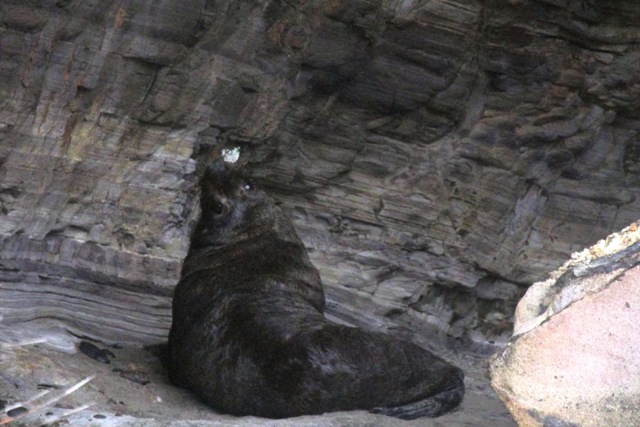 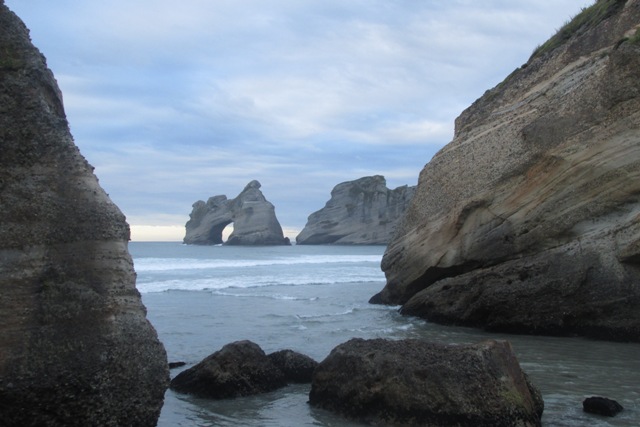 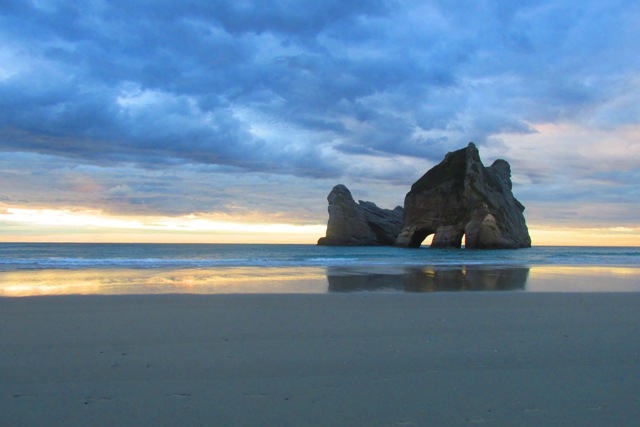