This one might be a stretch. But help exchange is sort of like being indemnified for the loss of our free time and the damage to our smooth hands that are now filled with blisters and calluses. In Napa Valley, we are compensated heartily. In mushroom risotto, homemade sangria, laughter, card games, and strong coffee to start the day.

The wine country of California has been the destination I had in mind for a few months, so it was nice to arrive. John and Cathy had over twenty positive reviews on their help exchange profile (usually to see four or five reviews is impressive), so I’d been anxious to meet them. We’ve been here for five hours and I could already write twenty positive reviews. John’s card tricks, playing spoons, the pork tacos, the way Cathy talks about the characters in her audio book like they’re her dearest friends, the view from the vineyard, to name a few. John is 68 years old and he won the love of an older woman when they were in high school. Cathy will be 70 in a few months. They’re active and hilarious and both say outrageous things to get a reaction from the other. If they had a TV show, I’d DVR it for sure.

There are two other help exchangers here and it’s been thrilling to find commonalities, of which there are an abundance. Caroline is from Boston and is wicked awesome. She made a Friends reference within the first couple hours of meeting her, and also compared her windy bike ride to “riding through peanut butter.” It’s silly, but I instantly knew she’d be someone I would like. Daniel is from Toronto and is an editor and journalist.

Dwayne asked, “Did you get Caroline’s phone number?” right in front of her and I thought, what a great way to casually progress the friendship. I’m hoping she’ll want to travel with me a bit when Dwayne leaves. Maybe he can mention that casually around her as well so I avoid serious rejection. 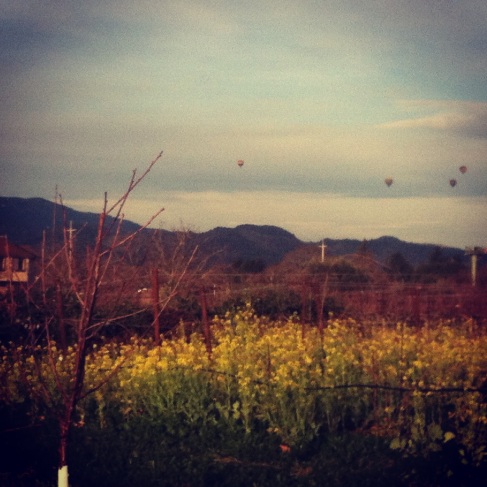 hot air balloons over the vineyard!